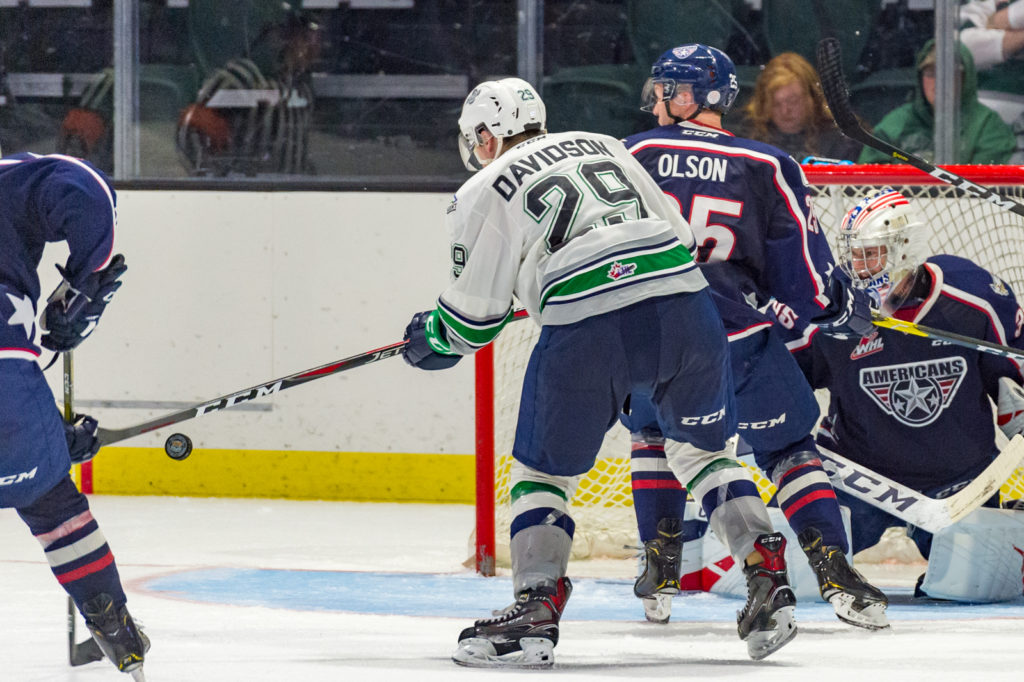 EVERETT, August 31, 2019 — Jared Davidson scored with 18 seconds left in the preseason game against the Tri-City Americans Saturday afternoon at Angel of the Winds Arena to give the Seattle Thunderbirds a 4-3 win.

The win was the T-Birds second at the Delta Hotels Preseason Classic. They beat the Vancouver Giants 4-2 Friday. The Classic ends for the T-Birds on Sunday against the Everett Silvertips at 7pm.

Payton Mount came out of the right corner with the puck and got a shot on Tri-City goalie Beck Warm. The puck rebounded into the air and Davidson from the low slot batted it past Warm for the winning goal. Brendan Williamson had the second assist winning the puck to Mount in a board battle in the right corner.

Davidson had two goals and Lucas Ciona had a goal and two assists as the T-Birds came back from a two-goal deficit in the game.

Seattle cut the lead to one at 18:56 of the first on a power-play goal from Davidson. Ciona entered the offensive zone on the left wing and dropped the puck to Conner Roulette along the boards. Roulette fought through a check and found Davidson in the slot. Davidson beat Warm over the glove with a hard wrist shot for his second goal of the preseason.

The Americans went in front 3-1 at 2:20 of the second period on a power-play goal by Tyson Greenway.

The T-Birds quickly answered back with a power-play goal of their own at 5:25 of the second. Mount won a faceoff back to Simon Kubicek at the right point. Kubicek took a slap shot with Ciona in the slot. Ciona tipped the puck past Warm for his second goal of the preseason.

Ciona set up the T-Birds tying goal at 9:33 of the second. Ciona spun in the low right circle and skated up the boards. He then cut back into the right circle and took a wrist shot. Conner Roulette tipped the shot past Warm for his first goal of the preseason.

Seattle goalie Blake Lyda had 35 saves on 38 shots to get the win.