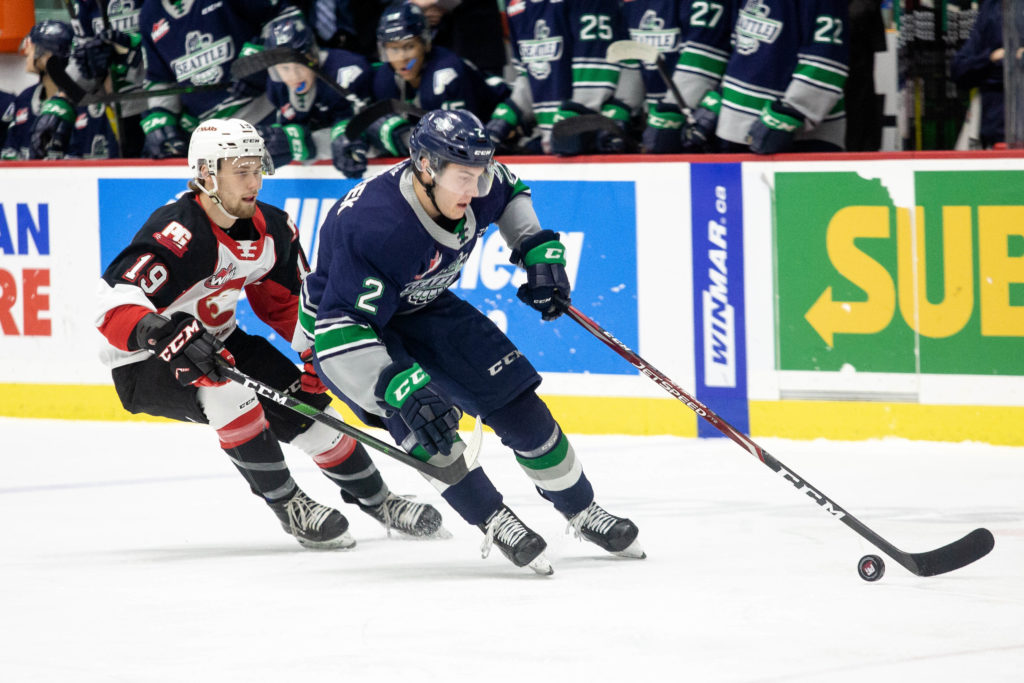 PRINCE GEORGE, BC, February 4, 2020 — The Prince George Cougars defeated the Seattle Thunderbirds 6-4 Tuesday night at CN Centre in the first of back-to-back games.

Prince George went in front 1-0 on a goal by Vladislav Mikhalchuk at 3:23 of the first period.

Prince George took a 3-0 lead on a goal from Cole Moberg 1:37 into the second period.

Cade McNelly started the comeback at 11:27 of the second with an unassisted highlight reel goal. Playing four-on-four McNelly skated into the offensive zone on the left wing. In the left circle McNelly spun towards the slot and lifted a backhand shot high past Prince George goalie Taylor Gauthier.

On the power play Gauthier went behind his net to play the puck but Matthew Rempe, skating hard, arrived at the puck at the same moment as Gauthier. Rempe forced a turnover behind the net that Owen Williams was able to get to. Williams passed the puck to Keltie Jeri-Leon to the right of the net. Gauthier scrambled to get back in his crease as Jeri-Leon fired the puck high into the net at 14:54 of the second to get his 21st goal of the season.

Conner Bruggen-Cate tied the game 3-3 at 17:11 of second on the power play. Henrik Rybinski skated the puck down the right wing and took a shot. The puck rebounded into the slot where Payton Mount and Andrej Kukuca each got a stick on it. Bruggen-Cate got the puck in the slot and snapped it past Gauthier for his 12th goal of the season.

Seattle took the lead 4-3 at 5:18 of the third period on a play off a faceoff. Rempe won the puck in the right circle to Mount who skated into the low right circle. Ryan Gottfried pinched down from the left point and Mount passed the puck through the low slot. Gottfried got the pass and beat Gauthier high as the goalie lunged to make the save.

Prince George tied the game 4-4 on a goal by Justin Maser at 8:51 of the third and took the lead 5-4 at 16:56 when Ethan Browne scored on a delayed penalty call against the T-Birds.

Seattle pulled goalie Roddy Ross for an extra attacker with 2 minutes left in the game. The T-Birds pressured in the offensive zone but Connor Bowie was able to hit the empty net with 39 seconds left to seal the win for the Cougars.