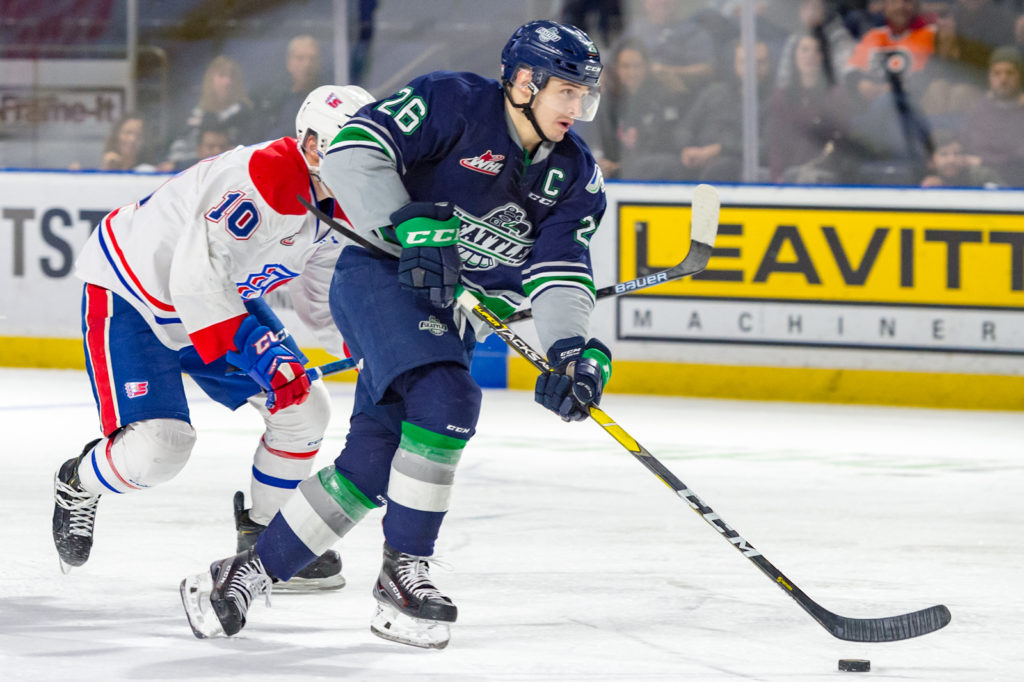 Volcan has two goals in 5-3 loss to Spokane

The T-Birds travel to Everett to play the Silvertips on Saturday at 7:05pm. They are in Spokane on Sunday to face the Chiefs at 5:05pm.

Seattle (11-15-3-0) took a 1-0 lead at 10:40 of the first period on a great shorthanded goal by Nolan Volcan. Spokane kept up good pressure on their power play as the T-Birds penalty kill unit of Volcan, Matthew Wedman, Reece Harsch, Jake Lee and goalie Liam Hughes bent but did not break. The four-some blocked multiple shots and Hughes made several good saves before Volcan was able to poke the puck out of the zone. The Chiefs mishandled the loose puck in the neutral zone and Volcan skated hard to get it and get a breakaway. Volcan came down on Spokane goalie Bailey Brkin and beat him with quick shot through the goalie’s legs.

Spokane (18-11-2-2) tied the game 1-1 with one minute left in the game on a power-play goal by Jake McGrew. Luke Toporowski and Jack Finley had the assists.

The Chiefs outshot the T-Birds 9-7 in the first period.

McGrew scored at 1:35 of the second period on assists from Eli Zummack and Adam Beckman to put the Chiefs up 2-1.

Volcan answered back for the T-Birds at 8:15 of the second period. A Chiefs defenseman mishandled the puck at the Seattle blue line to give Volcan a breakaway. Volcan skated at Brkin, made a move left and then brought the puck to his backhand and lifted it over the goalie’s left pad for his second goal of the game.

Beckman scored at 9:36 of the second to make it a 3-2 Chiefs lead. McGrew had the only assist.

Payton Mount tied the game 3-3 at 17:33 of the second. Mount came out of the left circle and into the left circle. Mount wired a wrist shot over Brkin’s glove for his second goal of the season.

Zummack scored an unassisted goal at 19:45 of the second to give the Chiefs a 4-3 lead.

Spokane outshot Seattle 15-7 in the second period and led 24-14 in shots after two periods.

With just over a minute left in the third period the T-Birds pulled goalie Liam Hughes for an extra attacker. The T-Birds had several good chances before McGrew hit the empty net with 29 seconds left in the game.

Seattle outshot Spokane 13-8 in the third period but the Chiefs finished with a 32-27 advantage in shot.