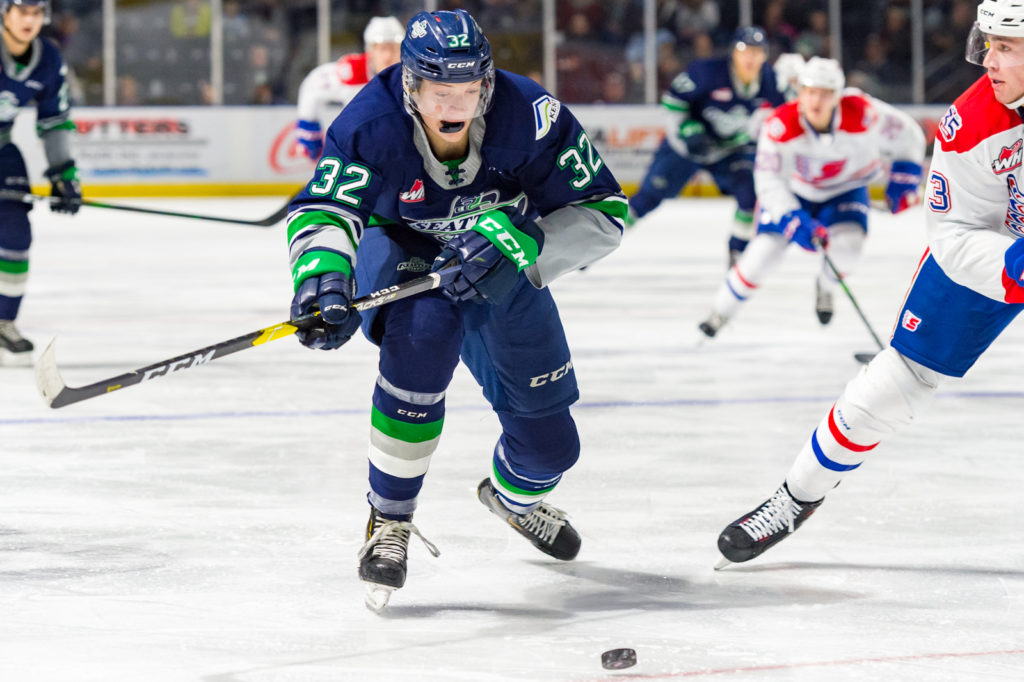 Bauer and Rempe score in 4-2 loss to Spokane

Prior to the game against the Chiefs a media conference was held as part of the announcement of the inaugural U.S. Challenge Cup. WHL Commissioner Ron Robison was joined by T-Birds general manager Bil La Forge, Andrew Hutchison from Visit Kent, Les Grauer from Kent Valley Ice Centre and Dan Leiweke from NHL Seattle.

Andy Eide wrote a story for the NHL to Seattle website about the U.S. Challenge Cup.

Geoff Baker from the Seattle Times talked to La Forge and Robison about the U.S. Challenge Cup.

Seattle went in front 1-0 at 12:31 of the first period. Matthew Rempe won a faceoff in the right circle back to Luke Bateman at the right point. Bateman crossed the puck to Tyrel Bauer at center ice inside the blue line. Bauer one-timed Bateman’s pass and beat Spokane goalie Campbell Arnold over the blocker.

Spokane tied the game 1-1 at 13:59 of the first on a five-on-three power-play goal by Adam Beckman.

The Chiefs had a 3-1 lead after two periods on a power play goal by Eli Zummack at 17:01 and a goal from Michael King at 19:33. King’s goal went to video review for a possible high stick but the referees award the goal.

Rempe cut the Chiefs lead to 3-2 at 6:04 on the power play. Rempe banged in a rebound in front of Arnold for his third goal of the season. Owen Williams and Keltie Jeri-Leon had the assists.

Seattle goalie Roddy Ross was pulled with 1:24 left in third period for an extra attacker. Beckman was able to hit the empty net to seal the win for the Chiefs.