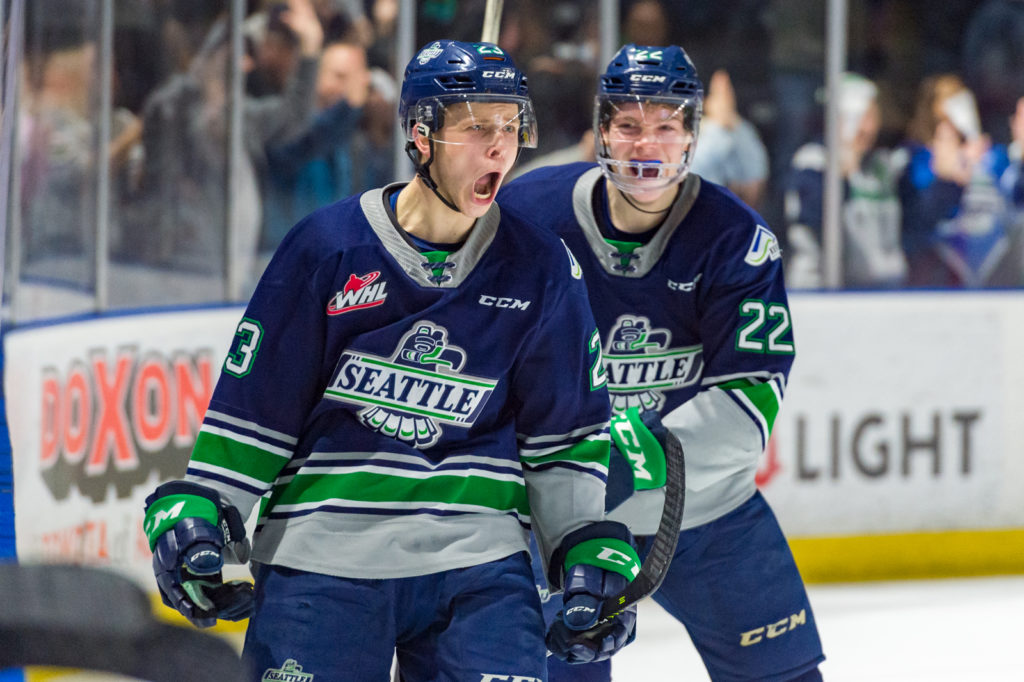 Williamson scores with 3:39 left in game for 3-2 T-Birds win

KENT, February 22, 2020 — Brendan Williamson will remember his first career WHL goal. Saturday night in front a rowdy 5,020 fans at accesso ShoWare Center Williamson scored his first career goal with 3:39 left in the game to give the Seattle Thunderbirds a 3-2 win over the Portland Winterhawks.

Williamson took a pass from Andrej Kukuca on the left wing and skated into the left circle. Williamson took a hard wrist shot and beat Portland goalie Dante Giannuzzi over the right shoulder. Williamson was mobbed by his teammates on the ice after he scored his first career goal.

Congratulations to Brendan Williamson on his first career @TheWHL goal. It was a game winner! 👏🏼👏🏼 pic.twitter.com/XNDj4UD2bV

Portland pulled Giannuzzi with 2:09 left in the game for an extra attacker. The T-Birds held off the Winterhawks to secure the win.

The T-Birds improve to 23-28-3-3 and are in the second Wild Card playoff spot in the Western Conference. They are three points behind the Kelowna Rockets (24-26-2-3) for the first Wild Card playoff spot. The Rockets have a game in hand on the T-Birds and the two teams will meet on March 6 in Kelowna in their fourth and final game of the season.

Portland took a 1-0 lead at 1:11 of the first period when Jonas Brondberg scored.

Seattle tied the game 1-1 at 10:29 of the first on a power-play goal by Matthew Rempe. Conner Roulette had the puck behind the goal line and centered it to Rempe on top of the crease. Rempe put the puck over Portland goalie Dante Giannuzzi’s right shoulder for his 11th goal of the season. Keltie Jeri-Leon had the second assist on the goal by retrieving the puck in the right corner and sending it to Roulette behind the net.

Roulette has a eight-game point streak which tied Conner Bruggen-Cate for the longest T-Bird point streak of the season.

Kai Uchacz put the T-Birds in front 2-1 at 3:13 of the second period. Williamson made a nice saucer pass from the left wing boards to Uchacz coming down the slot. Uchacz was in alone against Giannuzzi and beat the goalie over the glove. Cade McNelly had the second assist.