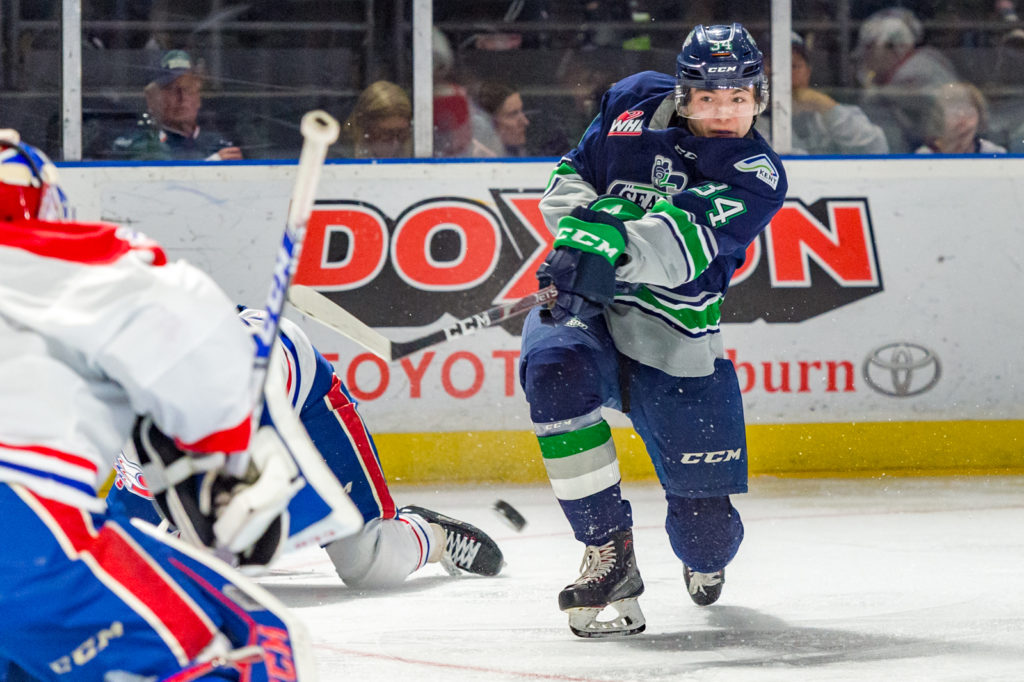 Kukuca has two goals in 5-2 loss to Spokane

On Sunday the T-Birds travel to Portland face the Winterhawks at 5pm. This game will broadcast locally on JOEtv Channel 22/Cable 110.

Spokane went in front 1-0 on a power-play goal by Adam Beckman at 12:31 of the first period.

Seattle tied the game 1-1 at 5:52 of the second period. Retrieving the puck in the defensive zone Tyrel Bauer backhanded it from the right wing to left wing to Lucas Ciona. Ciona took a hit but was able to pass the puck up the center of the ice Andrej Kukuca. Kukuca made a move on the defenseman and to come in on Spokane goalie Campbell Arnold all alone and beat him with a wrist shot over the glove.

The Chiefs took a 2-1 lead at 12:05 of the second with a five-on-three power-play by Beckman and then went in front 3-1 at 16:06 when Beckman scored a third goal on the power play.

Kukuca cut the Chiefs lead to two at 6:54 of the third period with his second goal of the game. Spencer Penner had the puck at the top of the right circle in the defensive zone. Penner spotted Kukuca heading up ice and hit him with a pass to put give him a breakaway. Kukuca, while being harassed by a defensemen, came in on Arnold and beat the goalie with a backhand shot on the glove. Conner Bruggen-Cate had the second assist.

The assist was Penner’s first point as a T-Birds. Penner was called up from the Eastman Selects Midget team and was playing in his second game as a T-Bird.

🍎Penner. His first point in the WHL. Passes puck from top of right circle up ice to Kukuca breaking.
🍏Bruggen-Cate. Moved puck up wall to Penner.
Kukuca beat Arnold with a backhand on the glove side for his second of the game. pic.twitter.com/1wXFiNXdNL

Seattle pulled goalie Blake Lyda with 1:57 left in the game for an extra attacker. They hit a post after sustained pressure but Zummack scored an empty-net goal with 24 seconds left in the game to seal the win for the Chiefs.