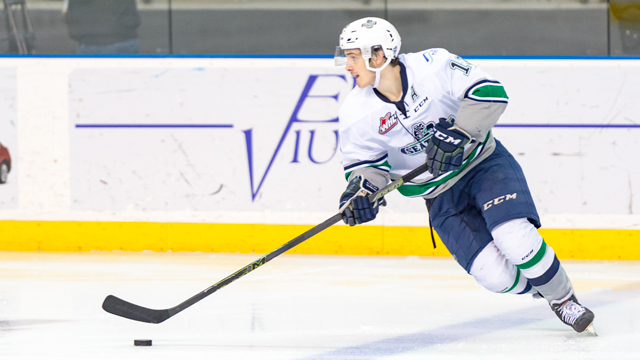 KENT, FEBRUARY 9, 2016 — Mathew Barzal had a hat trick and Logan Flodell made 31 saves to lead the Seattle Thunderbirds to a 6-0 shutout victory over the Kelowna Rockets Tuesday night at ShoWare Center.

The shutout was Flodell’s second of the season. He made eight saves in the first period, 10 in the second period and 13 in the third period. Flodell’s record is now 15-12-3-0. Flodell shut out the Rockets in a 2-0 victory on January 31 at ShoWare Center. He made 23 saves in that game.

Barzal had the T-Birds first goal of the game and then scored two goals 36 seconds apart early in the third period to get the hat trick. Barzal has 18 goals on the season.

This was the second game of a home-and-homer series between the teams. The Rockets beat the T-Birds 7-4 Monday in Kelowna.

Seattle (29-22-3-0) took a 2-0 lead with two goals 44 seconds apart late in the first period.
First Barzal scored from the low slot with 1:09 left in the period. Scott Eansor had the puck in the left corner. Eansor passed the puck to Ryan Gropp behind the net. Gropp skated out from behind the net centered it to Barzal. Barzal beat Kelowna goalie Michael Herringer over the glove for his 16th goal of the season. Barzal scored Monday night in Kelowna.

Then Keegan Kolesar converted a pass from Nick Holowko with 24 seconds left in the period to give the T-Birds a 2-0 lead. Holokwo raced down the left wing. At the faceoff circle he crossed the puck to Kolesar who snapped it over Herringer’s glove. Ethan Bear had the second assist.

The T-Birds had a 27-18 advantage in shots after two periods by outshooting the Rockets 16-10 in the period.

The T-Birds struck for three goals in 1:29 early in the third period to take a commanding 5-0 lead.

Barzal made it 3-0 when he scored on a breakaway at 1:19 of the third. Barzal took a pass from Kolesar in the neutral zone and skated in on Herringer. Barzal beat Herringer with a move to his backhand and he put the puck high into the left corner of the net.

Just 26 seconds later Barzal struck again to complete the hat trick. He got the puck past Herringer at the right post. Bear and Kolesar had the assists on the hat trick goal.

Ryan Gropp took a feed from Barzal and beat Herringer with a wrist shot from the left circle at 2:49 to make it a 5-0 lead. Eansor had the second assist on the goal.

At 16:41 of the third Eansor was awarded a penalty shot when he was hooked on a breakaway. Eansor beat Herringer with a move to his forehand but the puck rolled off his stick and into the boards.

Josh Uhrich completed the scoring for the T-Birds when he banged in the rebound from an Ethan Bear shot at 16:46 of the third. Andreas Schumacher had the second assist on the goal. 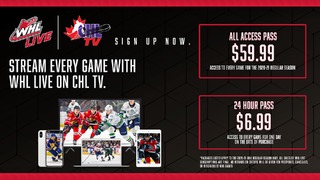