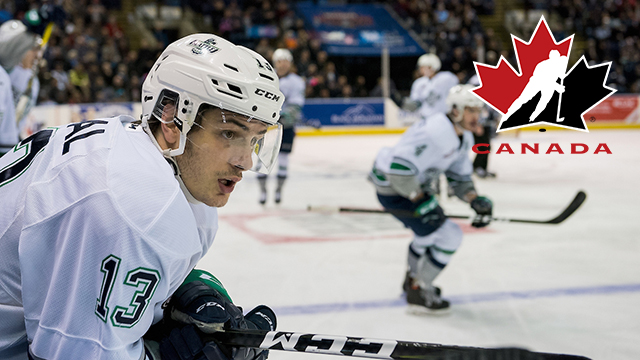 Seattle Thunderbirds center Mathew Barzal will serve as an alternate captain for Team Canada at the upcoming 2017 IIHF World Junior Championship in Montreal and Toronto.

The 19-year-old Barzal, a first round pick (16th) of the New York Islanders, was returned to the Emerald City after beginning the 2016-17 season in Brooklyn. He skated in two games with the Islanders, recording no points.

Last week at the conclusion of a five-day selection camp in Boisbriand, Que., Hockey Canada announced the 22-player squad that will represent at the World Junior Champonship. Barzal is one of five players returning from the 2016 squad that competed in Finland.

“We have eight players on this team who are captains of their club teams, and numerous other associate captains, so there is an abundance of leadership,” said Dominique Ducharme (Joliette, Que. / Drummondville, QMJHL), head coach of Canada’s National Junior Team, in a Hockey Canada release. “Dylan, Mat and Thomas have been through this tournament before, and we have confidence in their ability to lead this team on and off the ice.”

Dylan Strome (C), Mathew Barzal (A) and Thomas Chabot (A) to captain Canada at the #WorldJuniors. https://t.co/VnSt7nmUkt pic.twitter.com/oUAR2G1J6F

Barzal previously represented Canada and captured bronze at the 2015 IIHF U18 World Championship, while winning goal as a member of Team Canada at the 2014 Ivan Hlinka Memorial Cup.

The 2017 IIHF World Junior Championship officially gets underway Dec. 26 in Montreal and Toronto. Canada will take on Russia at Toronto’s Air Canada Centre at 8 p.m. ET.

Additionally, Barzal and Canada will play three pre-tournament games as a part of the Road to the World Juniors. That action gets underway tonight (Monday at 7 p.m. ET) as Canada faces Finland in Montreal. Pre-tournament play continues Dec. 21 in Ottawa against the Czech Republic and Dec. 23 in Toronto against Switzerland. All pre-tournament games will be broadcast by TSN (check local listings for details).

Barzal is one of seven WHL players representing Canada at the 2017 IIHF World Junior Championship. Among those is goaltender Carter Hart (Sherwood Park, Alta.) of the Everett Silvertips, who was announced as the starting goaltender for Monday’s tilt against Finland.