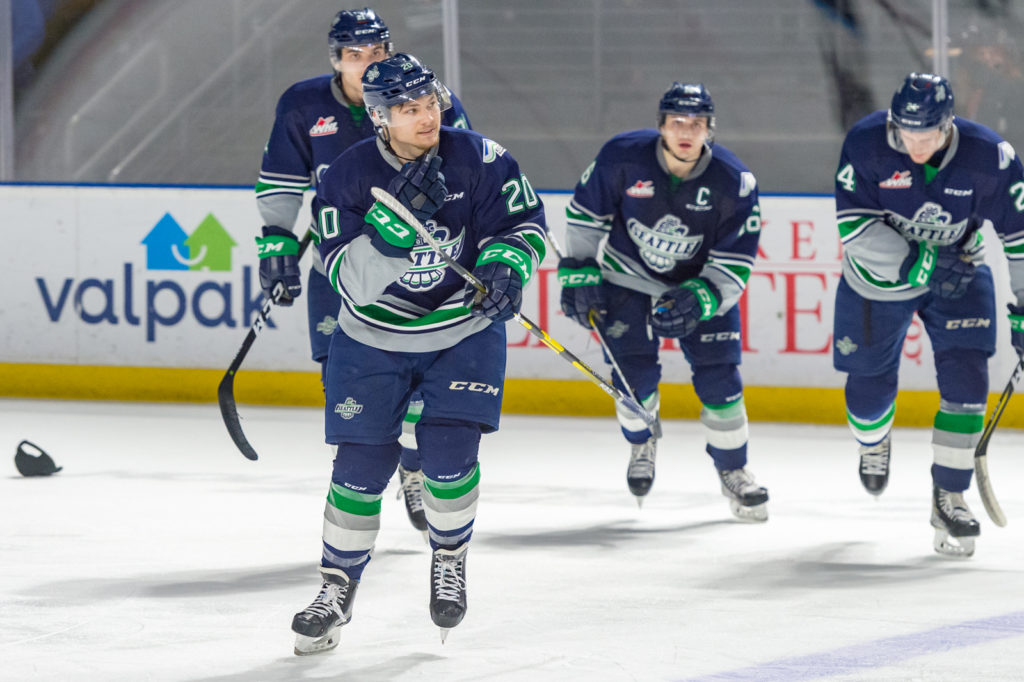 KENT, November 30, 2018 — Zack Andrusiak had a trick Friday night in front of 4,257 fans at accesso ShoWare Center to lead the Seattle Thunderbirds to a 7-4 victory over the Kootenay ICE.

Andrusiak had a hat trick in the T-Birds last game, a 4-3 loss to the Winterhawks on November 24 in Portland.

Andrej Kukuca had a goal and an assist in the game and Owen Williams and Nolan Volcan each had two assists.

The T-Birds travel to Kamloops to play the Blazers on Saturday at 7pm.

Seattle (9-12-3-0) took a 1-0 lead at 3:36 of the first period. Reece Harsch had the puck at the right point and crossed it to Owen Williams at the left point. Williams found Andrusiak in the slot. Andrusiak put a hard wrist shot over Kootenay goalie Duncan McGovern’s glove for his 16th goal of the season.

The T-Birds outshot the Ice 11-3 in the first period.

Simon Kubicek scored 42 seconds into the second period to put the T-Birds up 2-0. Nolan Volcan moved the puck up to Andrusiak on the right wing for a three-on-two break. Andrusiak crossed the puck from the right circle to Kubicek in the left circle. Kubicek one-timed the pass and beat McGovern low on the stick side.

Noah Philp got the two-goal lead back at 4:35 of the second. Andrej Kukuca forced a turnover in the right corner. Kukuca found Philp in the right circle. Kukuca beat McGovern low on the stick side for his 10th goal of the year.

Kootenay’s Peyton Krebs scored at 5:40 of the second cutting the T-Birds lead to one goal. Brad Ginnell and Jaeger White had the assists.

Andrusiak struck at 6:08 of the second to put the T-Birds back in front by two goals. Volcan passed the puck up the left wall to Andrusiak who carried it into the offensive zone. Matthew Wedman charged hard down the slot drawing a defender and freeing up space for Andrusiak. Andrusiak skated into the low left circle and snapped the puck over McGovern’s glove. Williams had the second assist.

Krebs scored off an assist from Ginnell at 8:38 to cut the T-Birds lead to one goal.

Seattle outshot Kootenay 15-9 in the second period and led 25-12 in shots after two periods.

Krebs tied the game 4-4 at 3:41 of the third period with a power-play goal. Ginnell and White had the assists.

Seattle quickly took the lead back at 4:49 of the third on Kukuca’s sixth goal of the season. Samuel Huo won a faceoff in the right circle of the offensive zone forward. Huo took a shot that came off McGovern right to Kukuca on top of the crease. Kukuca lifted the puck over the goalie.

Andrusiak completed the hat trick at 9:50 of the third. Matthew Wedman passed the puck to Andrusiak in the right circle. With traffic in front of McGovern Andrusiak beat the goalie low with a wrist shot. Jaxan Kaluski had the second assist.

Tyler Carpendale scored at 14:17 of the third to get the T-Birds seventh goal. Philp found Carpendale in the left circle and he beat the goalie with a quick snap shot. Dillon Hamaliuk had the second assist.