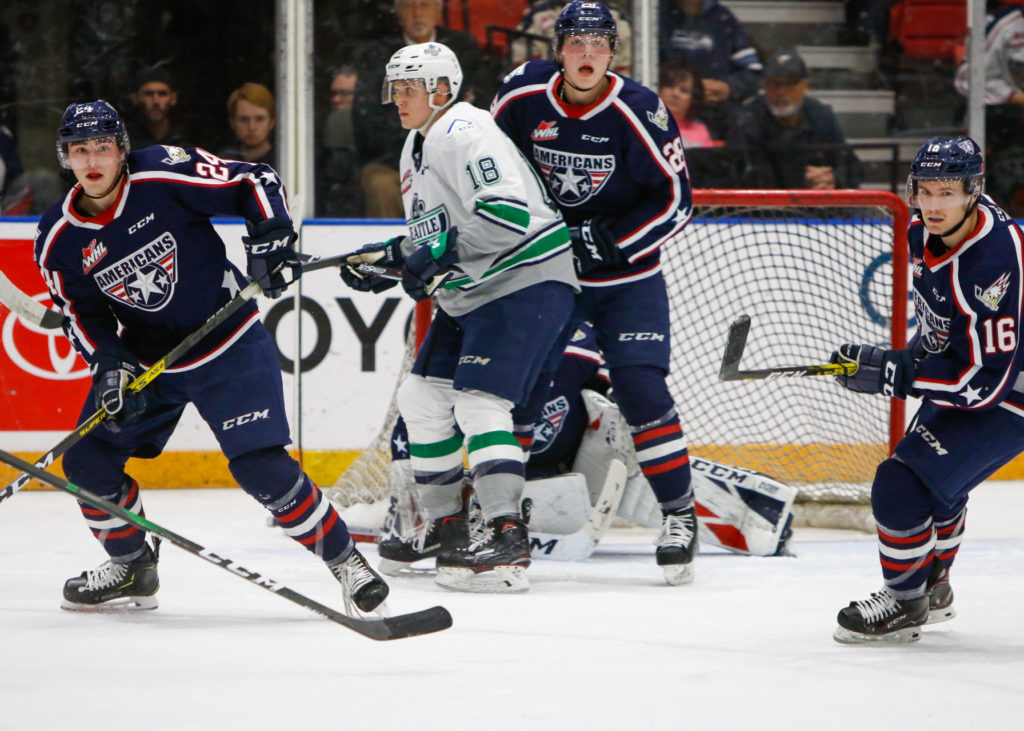 Gottfried and Kukuca score in 5-2 loss to Tri-City

The T-Birds are in Portland on Saturday to face the Winterhawks at 6pm at Veterans Memorial Coliseum. The game will be broadcast in Seattle on JOEtv Channel 22/Cable 110. This is the first of eight games between the T-Birds and Winterhawks being broadcast on JOEtv this season. The T-Birds released the JOEtv broadcast schedule on October 30.

Reid Schaefer made his T-Birds debut against the Americans. Schaefer was selected by the T-Birds in the eighth round, 164th overall, in the 2018 Bantam Draft. He signed a WHL Standard Player Agreement with the team on September 2, 2018.

Seattle (5-6-2-1) took a 1-0 lead at 4:45 of the second period just after they killed off a Americans power play. Simon Kubicek hit Ryan Gottfriend with a pass at center ice as Gottfried was coming out of the penalty box. Gottfried had a breakaway and came down on Tri-City goalie Beck Warm. Gottfried beat Warm on the blocker side off the post and in for his goal as a T-Bird. Goalie Roddy Ross had the second assist on the goal for his first point in the WHL.

Seattle killed off 1:28 of a Americans five-on-three power play with just under eight minutes left in the second. Matthew Wedman almost put the T-Birds in front on a breakaway down two men, but he hit the right post with his shot.

The Americans took a 2-1 lead on an unassisted goal by Samuel Stewart at 16:52 of the second.

Andrej Kukuca tied the game 2-2 51 seconds into the third period on the power play. Wedman took a shot that came off Warm with Jared Davidson then getting a stick on the puck. Kukuca chipped the second rebound over Warm for his sixth goal of the season.

Seattle pulled Ross with 1:33 left for an extra attacker to try and tie up the game. Connor Bouchard and Marc Lajoie each scored an empty-net goal though to seal the win for Tri-City.