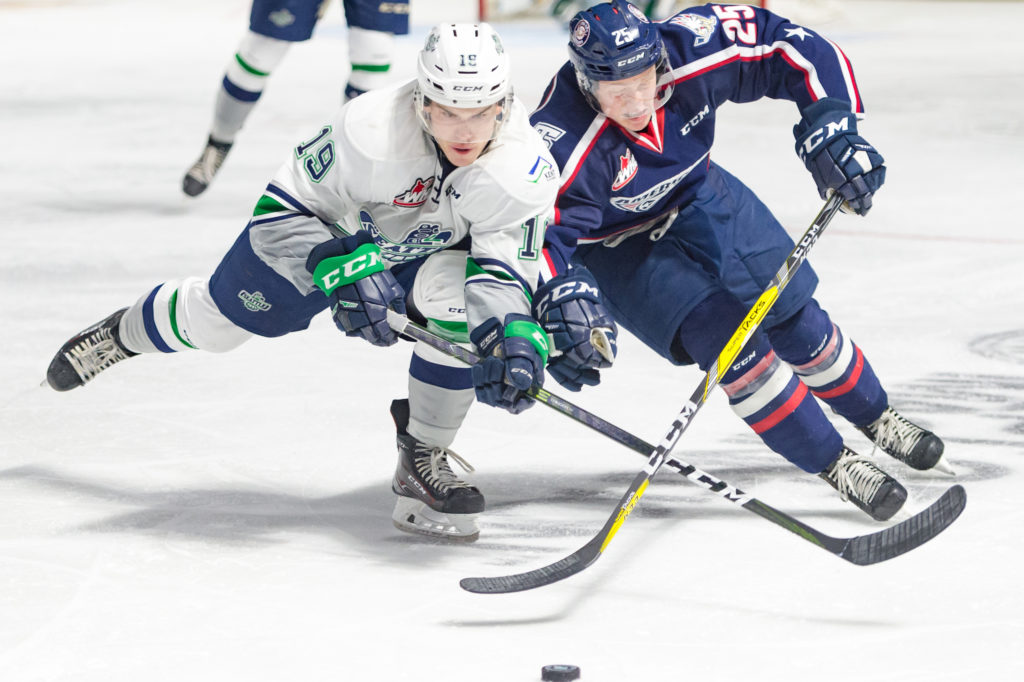 KENNEWICK, October 3, 2017 — The Tri-City Americans defeated the Seattle Thunderbirds 3-2 Tuesday night in a shootout at the Toyota Center in Kennewick.

The T-Birds next game is Saturday against the Portland Winterhawks at accesso ShoWare Center at 6:05pm. This game will be broadcast on JOEtv in Seattle.

The Americans went first in the shootout and sent out Morgan Geekie. Geekie beat Seattle goalie Matt Berlin over the glove. Zack Andrusiak, Seattle’s first shooter, was denied by Tri-City goalie Patrick Dea on a move at the right post.

Michael Rasmussen, the second Tri-City shooter, was stopped by Berlin. Sami Moilanen got Dea out of position on his attempt but had the puck roll off his stick and past the net.

Jordan Topping, the third Tri-City shooter, put a backhand attempt over the Seattle net. Donovan Neuls needed to score to send the shootout to sudden death but his shot just missed the net at the left post.

Tri-City took a 1-0 lead on a power-play goal by Michael Rasmussen at 1:23 of the second period. Nolan Yaremko and Morgan Geekie had the assists.

Seattle tied the game 1-1 at 10:51 of the second. Jarret Tyszka took a point shot that hit the glass behind the Americans net. Moilanen collected the puck and came out from behind the net into the right circle. Moilanen crossed the puck through the slot to Nolan Volcan in the left circle. Volcan beat Dea high with a wrist shot to tie the game.

The T-birds took a 2-1 lead at 4:03 of the third period on an unassisted goal by Noah Philp. Philp intercepted a Tri-City clearing attempt just inside the blue line at center ice. Philp skated at Dea and beat the goalie low on the stick side for his first goal as a T-Bird.

The Americans tied the game 2-2 at 16:14 of the third on a goal from Carson Focht. Maxwell James and Sergei Sapego had the assists.