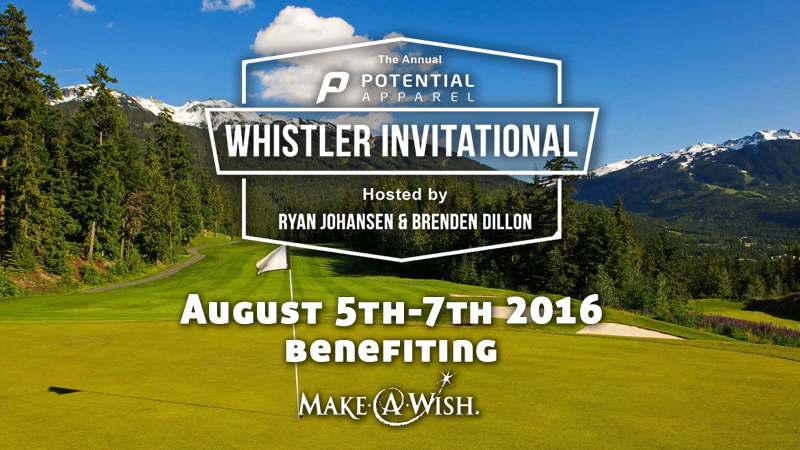 One of the many perks of receiving an NHL salary is that it provides the ability to help out those who are less fortunate. For former Thunderbird captain Brenden Dillon, that has come to fruition in the form of a charity golf tournament held in Whistler, B.C. Hosted by Dillon – a defenseman for the San Jose Sharks – and Nashville Predators’ center Ryan Johansen, the Potential Apparel Whistler Invitational is the players’ way of giving back to the community while still enjoying themselves at the same time. This year’s tournament will be the second one that the duo has hosted, and will be held from August 5-7 at the Fairmont Chateau Whistler Golf Course. Players will be lodged at the Fairmont Chateau Whistler hotel, with transportation to and from Whistler Village being provided.

“It’s me and Ryan [Johansen], we’re good buddies,” Dillon said. “We just put on a golf tournament in Whistler, BC. The Brenden Dillon-Ryan Johansen Whistler Invitational, it’s benefitting Make-a-Wish foundation. So Make-a-Wish foundation is for less fortunate kids who are battling illness and what not. They try to accomplish wishes that the kids have, whether it’s going to an NHL game or going to Disneyland. Usually these wishes are a little bit more expensive, and unfortunately for them, time’s not always on their side for being able to be in this world.”

For the two British Columbia natives, the tournament not only allows them to connect with children dealing with illness, but also with former and current NHL players who also enjoy hitting the links. With his Seattle Thunderbird roots, Dillon was also able to reach out to some marquee names that have played at ShoWare Center in recent years.

“Actually Matt Barzal is coming up; Shea Theodore is coming up,” Dillon explained. “Martin Jones [of the San Jose Sharks] is coming. Ryan Ellis – who plays in Nashville – so it should be a pretty good turnout. This is going to be the second summer we’re doing it. It went really well last summer. We had a lot of fun, and we were able to raise somewhere around $30,000 to $35,000.We weren’t sure what kind of dollar amounts we were going to end up with, but it went tremendously for us.”

Add the impressive monetary success from last year with the hype surrounding Western Conference champions Dillon and Jones, and the tournament could expect to see an even greater sum of donations this summer. According to the tournament’s website, each foursome will have one NHL player on it. It will be a best ball format, and tee prizes, games, and hole-in-one contests will also be part of the festivities.

The tournament is also open to non-golfers. Dillon pointed out that all are welcome to join the fun in Whistler even if they don’t bring a bag of clubs.

“Even if you’re not in the tournament you’re able to come out,” Dillon assured. “We still have places where you can donate, but all the money goes to that.”

There is also an array of events for guests to take part in away from the golf course. On Friday night the hotel will be serving appetizers and drinks while allowing the guests to mingle and network with each other. A silent auction will be followed by an after party at a currently secret location. An auction and after party will also be part of the events on Saturday night as well.

For Dillon, the inspiration to hold his own charity golf tournament stemmed from an interaction he had with Montreal Canadiens defenseman Shea Weber at his own event. Being a fan of golf and a naturally outgoing person, Dillon thought that a tournament of his own would be an ideal way to have some fun while simultaneously engaging in positive community outreach.

“I had been to a couple [charity tournaments] myself,” Dillon said. “I went to one in Kelowna. Shea Weber had one that he used to put on. We just thought ‘Hey, there’s not really one in the Vancouver area. Why not us?’ We’re two guys who like to give back to the community. We like to be a part of our community. We thought this was a perfect way to be able to do something like that.”

Besides being a giving, altruistic person, Dillon also possesses a great sense of self-awareness. Not only did he realize that his status as a professional athlete enables him to have a widespread influence on people in need, but he also has a very honest evaluation of his golf skills. When asked which of the NHL players scheduled to appear has the worst golf game, Dillon pointed the finger in a surprising direction.

Is there any chance that Dillon can salvage his golf game before stepping out on the course with several of his colleagues? Will there be any way to avoid the humiliation of slicing several balls into the trees, or hooking countless shots into the bunkers? Dillon says there may be a ray of hope in the form of shiny new equipment.

“I just got a set of new clubs actually a couple weeks ago. They actually seem to work better than the ones I had before,” Dillon revealed. “So [now] I don’t have an excuse anymore for why my ball’s not going straight down the pipe. So, we’ll see. I have to be honest with myself.”

Being honest with himself has been one of the reasons why this tournament was born in the first place. Dillon understood that while he’s not one of the highest paid or most popular players in the league, he certainly can still have an enormous impact on children who need it the most. Whether it’s understanding his place as an uplifting spirit for the Make-a-Wish children of Canada, or begrudgingly admitting that his co-host Ryan Johansen is probably the best golfer of the bunch, Brenden Dillon’s honesty and mindfulness make him the perfect person to put on a charity golf tournament that NHL players, fans, and children can all enjoy.