Team Blue Gets Past Team White 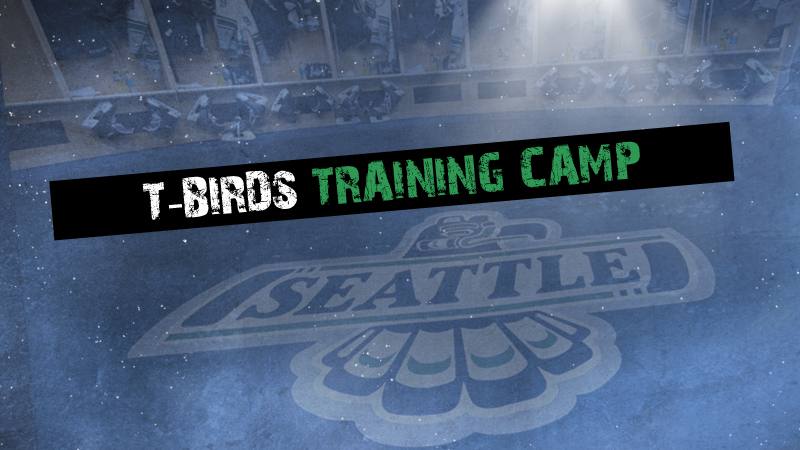 Volcan and Wedman score two goals each in 5-4 victory

The Thunderbirds will play six exhibition games prior to the start of the 2015-2016 regular season.

To start the preseason matchups, the T-Birds will play in the Everett Silvertips Holiday Inn Preseason Classic at Xfinity Arena. The first game will be Friday, September 4, at 11:30am against the Tri-City Americans. Classic play will continue with games on Saturday, September 5, at 3pm against the Victoria Royals. The Classic concludes Sunday, September 6, at 3 pm against the Spokane Chiefs.

The T-Birds next preseason appearance will be in Kennewick at the Red Lion Hotels’ Preseason Tournament at the Toyota Center. The T-Birds will play the Kootenay Ice on Friday, September 11, at 3pm and face the Tri-City Americans on Saturday, September 12, at 7:05pm

The T-Birds will conclude their preseason schedule with a home game against the Victoria Royals on Friday, September 18, at 7:35pm at ShoWare Center.

Scott Eansor put Blue in front 1-0 at 9:17 of the first period. Eansor took a pass from Nolan Volcan in the left circle, skated towards White goalie Taz Burman and beat him through the legs.

Blue extended the lead to 2-0 at 19:05 of the first on a goal from Volcan. Eansor fed the puck from behind the White net to Volcan in front of the goal. Volcan beat Burman over the glove. Jamal Watson had the second assist.

White got on the board at 10:21 of the second period. Gabriel Kwiatkowski took a shot from the right point. Luke Ormsby was stationed in front of White goalie Logan Flodell and deflected Kwiatkowski’s shot past the goalie. Kaden Elder had the second assist.

White cut the lead to one goal at 11:38 of the second on a point shot from Jerret Smith. Mathew Barzal fed the puck to Smith at the right point. Smith’s shot hit Flodell but got behind him and trickled across the goal line. Gustav Olhaver had the second assist.

Blue got the two-goal lead back at 15:01 of the second. Matthew Wedman picked up a loose puck in front of Stankowski and beat the goalie over the blocker. Isaiah Cockerill and Alexander True had the assists.

Barzal cut the Blue lead back to one goal when he scored at 12:43 of the third period. Nick Holowko and Gustav Olhaver had the assists.

Blue went back in front by two goals at the 13-minute mark of the third period on Wedman’s second goal of the night. True fed the puck to Wedman from behind the net to set up the goal. Tyson Terretta had the second assist.

The T-Birds open the 2015-16 season in Vancouver against the Giants on Friday, September 25, at 7:30pm at Pacific Coliseum.

The T-Birds home opener for the 2015-16 season is Saturday, October 3, against the Prince George Cougars at 7:05pm at ShoWare Center.

Team Blue beat Team Grey 3-2 in the final scrimmage Friday night. Nolan Volcan put Team Blue in front 1-0 one minute into the scrimmage. Nick Holowko tied the game 1-1 for Grey a few minutes later. Ethan Bear put Grey in front 2-1 with a slap shot with 18 minutes left in the scrimmage. Volcan scored with 1:04 left on snapshot to give his team the win.

Team Grey beat Team White 1-0 in the first evening scrimmage Friday night. Mathew Barzal made a cross-slot pass to Baker Shore to the left of the goal. Shore one-timed Barzal’s pass past a lunging Logan Flodell.

In the third scrimmage Friday morning Team Grey beat Team Blue 4-3 in overtime. Jamal Watson scored on a penalty shot for Blue to give them a 1-0 lead. Blue went in front 2-0 on a goal from Jared Pelechaty. Ian Briscoe cut the Blue lead to one when he scored midway through the scrimmage. Watson made it a two-goal lead again when he tipped in a Turner Ottenbreit slap shot. Mathew Barzal cut the lead to one when he knocked in the rebound of a Brandon Schuldhaus shot. Nick Holowko tied the game 3-3 late in the scrimmage to force overtime. The teams played three-on-three in overtime. Barzal won the game with a penalty shot in overtime.

In the second scrimmage Team Grey beat Team White 4-2. Donovan Neuls opened the scoring a minute in to give White a 1-0 lead. Grey ties the game on a Nick Holowko goal which came on a pass from Mathew Barzal. Colton Thomas put Grey in front when he stole the puck from a defenseman in the zone and beat the goalie five-hole. Ian Briscoe increased the lead to 3-1 for Grey. Gabriel Kwiatkowski cut the lead to one goal for White. Barzal scored an empty-net goal to seal the win for Grey.

Team Blue beat Team White 2-0 Friday morning in the first scrimmage of the day. Luke Ormsby scored on a breakaway to get Blue’s first goal. Connor Pyne scored late in the scrimmage for the final Blue goal.

Rosters for Scrimmages 16 through 18 (pdf)

Team Blue took down Team White 2-0 in the first scrimmage of Main Camp. Nolan Volcan had both goals for White. Taz Burman had the shutout in net with 12 saves.

Team Blue took the second scrimmage 2-1 over Team Grey. Luke Ormsby and Volcan had the goals for Blue. Mathew Barzal scored on a penalty shot for Grey. Ian Briscoe had a penalty shot late in the game for Grey but Cole Elder stopped his attempt.

In the last scrimmage Thursday, Team Grey beat Team White 2-1. White took a 1-0 lead on a goal from Gustav Olhaver who converted a pass from behind the net. Barzal tied the game 1-1 off a nice pass from Nick Holowko. Dillon Hamaliuk put Grey in front 2-1 when he put back the rebound of a Reece Harsch shot.

Rosters for Scrimmages 13 through 15 (pdf)

Team Grey won the third scrimmage Thursday evening in a shootout. Grey went in front 1-0 seven minutes into the third scrimmage on a goal from Tyler Smithies. Blue’s Dawson Chase scored with 13 seconds left in the scrimmage to tie the game 1-1. Tyler Carpendale scored the only goal in the shootout to give Grey a 2-1 win.

Team Grey beat Team White 3-1 in the second evening scrimmage Wednesday night. White went in front 1-0 in the second evening scrimmage on a goal from Ian Briscoe. Grey defenseman Tanner Scott tied the game 1-1 with a sharp angle shot with 10 minutes to go in scrimmage. Elijah Brown put Grey in front 2-1 with seven minutes left in the scrimmage. McKenzie Wight scored an empty-net goal with under a minute left in the scrimmage for Grey’s final goal.

Team White defeated the Team Blue 2-0 in the first evening scrimmage on Wednesday. Ian Briscoe and Braden Sanchez scored for White. Hunter Bancroft and Parker Tobin combined for the shutout.

Rosters for Scrimmages 10 through 12 (pdf)

Team Grey opened the scoring in the first scrimmage on Wednesday on a goal from Gabriel Kwiatkowski. Kwiatkowski centered the puck from the left corner and it deflected off a White defenseman and past White goalie Hunter Bancroft.

Grey took a 2-0 lead midway through the scrimmage on a scramble play in front of Bancroft.
Team White cut the lead to one goal with just under three minutes left in scrimmage. Jarret Tyszka came down the left wing, cut towards the net and got a shot off. The puck got behind goalie Carl Stankowski and slid across the goal line.

Team Blue took a 1-0 lead in the second scrimmage on a goal from Jakob Stevenson. Jakob is the son of former T-Bird Turner Stevenson.  Blue went in front 2-0 a short time after Stevenson’s goal.

Hunor Torzsok got Team White on the board when he scored from the slot. Blue quickly answered on a goal from Dawson Chase from the left circle.

Wyatt Bear extended the lead for Blue to 4-1 late in the scrimmage. Kyle Budvarson scored with under a minute left to get Blue’s fifth goal.

In the final scrimmage of the morning, Team Grey beat Team Blue 1-0 in a shootout. Tyler Smithies and Zachary Jake Misskey scored in the shootout for Grey.

Rosters for Scrimmages 7 through 9 (pdf)

In the fourth scrimmage, Team Grey outscored Team White 4-1. On Team Grey the goals came from Tyler Carpendale, Tanner Hopps, and Dillon Hamaliuk who scored two goals one being an open net goal. From Team White the only score was from Hunor Torzsok.

In the fifth scrimmage, Team White came out and beat Team Blue in a 3-0 victory. Scoring for Team White was Jacob Pillar, Mitch Cook, and Hunor Torzsok.

In the sixth scrimmage, Team Grey beat Team Blue 2-0 in a two round shootout. For Team Grey Tyler Carpendale and Cole Broadhurst both scored. For Team Blue Owen Ozar and Matthew Wedman both stopped by Parker Tobin.

Rosters for Scrimmages 4 through 6 (pdf)

In the first scrimmage of Training Camp Team White defeated Team Blue 1-0. Luke Ormsby scored for White late in the scrimmage for the deciding goal.

In the third scrimmage, Matthew Wedman scored on the first shift for Blue and that goal held up as Blue beat White 1-0.

Rosters for Scrimmages 1 through 3 (pdf)

All Training Camp scrimmages and game are open to the public free of charge. Fans attending any of the scrimmages or game should enter ShoWare Center from the east side of the building.

The T-Birds open the 2015-16 season in Vancouver against the Giants on Friday, September 25, at 7:30pm at Pacific Coliseum.

The T-Birds home opener for the 2015-16 season is Saturday, October 3, against the Prince George Cougars at 7:05pm at ShoWare Center.