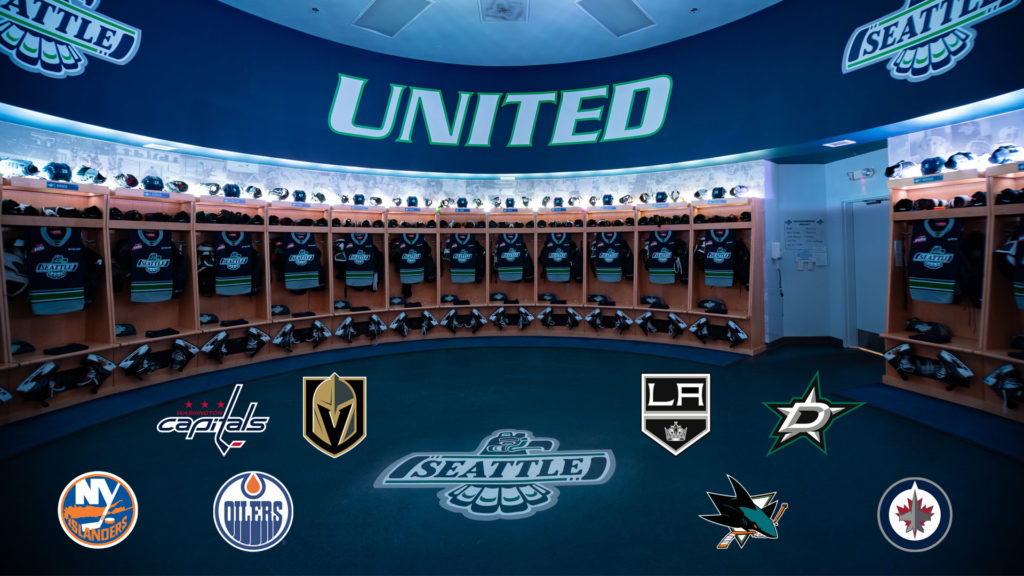 Five forwards, five defenseman, and one goalie comprise the 11 former T-Birds at Training Camps. All NHL teams have training camps underway as they prepare for the start of the NHL season on January 13.

The 2020-21 NHL season will consist of a 56-game schedule with re-aligned Divisions. The Divisions for this coming season are:

The 11 players and their T-Birds history is highlighted below.

Mathew Barzal, C, New York Islanders – Barzal played four seasons with the T-Birds from 2013 to 2017. In 202 career regular season games as a T-Bird Barzal had 63 goals and 215 assists for 278 points. Barzal is third in T-Birds history in career assists with 215 behind Glen Goodall (290) and Victor Gervais (237). Barzal is sixth in T-Birds history in career points. Barzal is first in T-Birds history in career playoff points with 17 goals and 48 assists for 65 points in 49 games. He was the WHL Playoff MVP as the T-Birds won the 2017 WHL Championship. Barzal was a two-time WHL Western Conference All-Star and was the 2016-17 WHL Western Conference Player of the Year. He was originally the number 1 overall selection in the 2012 Bantam Draft. He was a team co-captain with Scott Eansor during the 2016-17 season. Barzal was selected by the New York Islanders with the 16th overall selection in the 2015 NHL Draft. He has played 234 games over four seasons with the Islanders and has 59 goals and 128 assists for 207 points. He was named the NHL Rookie of the Year for the 2017-18 season.

Ethan Bear, D, Edmonton Oilers – Bear played four seasons with the T-Birds from 2013 to 2017. Bear had 66 career goals, to put him in first in team history in goals scored by a defenseman, and 126 assists for 192 points in 264 games. He is second in team history, 20 points behind Shea Theodore, for points scored by a defenseman. Bear was named the WHL Defenseman of the Year for the 2016-17 season after registering 28 goals and 42 assists for 70 points in 67 games to help lead the T-Birds to the 2017 WHL Championship. He was a two-time Western Conference First Team All-Star. Bear was selected by the Edmonton Oilers in the fifth round of the 2015 NHL Draft. He has played in 89 games with the Oilers over two seasons and has six goals and 19 assists for 25 points. He recently signed a two-year contract with the Oilers.

Brenden Dillon, D, Washington Capitals – Dillon played four seasons with the T-Birds from 2007 to 2011. He was the team captain in his final season as a T-Bird. Dillon appeared in 280 games as a T-Bird and had 94 points on 11 goals and 83 assists with 362 penalty minutes. Dillon was not selected in the WHL Bantam Draft or the NHL Draft. But after a standout 20-year old season where he had eight goals and 51 assists for 59 points, he signed a three-year entry-level contract with the Dallas Stars. Dillon has played 598 games in the NHL with the Stars, San Jose Sharks, and Washington Capitals and has 22 goals and 92 assists for 114 points with 574 penalty minutes. Dillon joined the Sharks in 2014-15 season in a trade from the Stars and joined the Capitals at the trade deadline last season.

Thomas Hickey, D, New York Islanders – Hickey played four seasons from 2005 to 2009 with the T-Birds. He was the team captain in his final season. In 262 career games he had 39 goals and 138 assists for 177 points. He won back-to-back gold medals with the Team Canada at the 2008 and 2009 World Junior Championship and was the captain of the 2009 team. Hickey was selected by the Los Angeles Kings with the fourth overall selection in the 2007 NHL Draft. Hickey was claimed by the New York Islanders on waivers in 2013. He has played 449 games with the Islanders over seven seasons and has 22 goals and 93 assists for 115 points.

Keegan Kolesar, RW, Vegas Golden Knights – Kolesar played four seasons with the T-Birds from 2013 to 2017. He appeared in 243 regular season games and had 77 goals and 90 assists for 167 points with 338 penalty minutes. Kolesar led the 2017 WHL playoffs in scoring with 12 goals and 19 assists for 31 points in 19 games to help lead the T-Birds to their first WHL Championship. Kolesar was selected by the Columbus Blue Jackets in the third round of the 2015 NHL Draft and signed a three-year entry-level contract in December of 2015. He was acquired by the Vegas Golden Knights from Columbus at the 2017 NHL Draft. Kolesar made his NHL debut last season against the Blue Jackets.

Patrick Marleau, C, San Jose Sharks – Marleau played two seasons with the T-Birds from 1995 to 1997. He appeared in 143 games and had 83 goals and 116 assists for 199 points. Marleau was the second overall selection in the 1997 NHL Draft by the San Jose Sharks. He played 19 seasons with the Sharks, followed by two seasons with the Toronto Maple Leafs, and then a split season with the Sharks and Pittsburgh Penguins. Marleau has played 1,723 career games in the NHL and has 562 goals and 626 assists for 1,188 points. He is currently fifth in NHL history in games played. Marleau is 44 games shy of Gordie Howe’s career NHL games played record and could break that record this season. He is a two-time Olympic Gold Medal winner with Canada (2010, 2014).

Austin Strand, D, Los Angeles Kings – Strand was acquired by the T-Birds at the trade deadline of the 2016-17 season from the Red Deer Rebels. He was an integral part of the team winning the 2017 WHL Championship. In 105 games over two seasons with the T-Birds he had 33 goals and 48 assists for 81 points. He signed a three-year entry-level contract with the Los Angeles Kings in November of the 2017-18 season. He finished this season with 25 goals and 39 assists for 64 points. Strand has spent the past two seasons with the Ontario Reign of the AHL and has not made his NHL debut as of yet. He is competing for a roster spot at the Kings Training Camp for this season.

Shea Theodore, D, Vegas Golden Knights – Theodore played four seasons for the T-Birds from 2011 to 2015. He finished his T-Birds career as the highest scoring defenseman in team history 212 points on 58 goals and 154 assists. Theodore won the 2015 WHL Defenseman of the Year Award. He won a gold medal with Team Canada at the 2015 World Junior Championship. Theodore was selected by the Anaheim Ducks in the first round of the 2013 NHL Draft. He was acquired by the Vegas Golden Knights during the 2017 NHL Expansion Draft. In five seasons with the Ducks and Golden Knights he has appeared in 264 games and has 36 goals and 93 assists for 129 points. Theodore played in the 2018 Stanley Cup Final with the Golden Knights in their expansion season.

Nate Thompson, C, Winnipeg Jets – Thompson played four seasons with the T-Birds from 2001 to 2005. He played 253 careers games for the T-Birds and had 55 goals and 88 assists for 143 points. Thompson was selected in the sixth round of the 2003 NHL Entry Draft by the Boston Bruins. Thompson has played 16 seasons with eight NHL teams (Boston Bruins, New York Islanders, Tampa Bay Lightning, Anaheim Ducks, Ottawa Senators, Los Angeles Kings, Montreal Canadiens, Philadelphia Flyers). He signed with the Winnipeg Jets, his ninth NHL team, on October 10, 2020. He has played 767 career NHL games and has 62 goals and 94 assists for 156 points. Thompson joined the 31 Thoughts podcast with Elliotte Friedman and Jeff Marek on May 21, 2020 and talked about his long NHL career.

Alexander True, C, San Jose Sharks – True played three seasons with the T-Birds from 2014 to 2017. He had 45 goals and 39 assists for 84 points in 169 games. He capped off his WHL career with the championship-winning goal in overtime of Game 6 of the 2017 WHL Championship Series. The goal delivered the Thunderbirds a 4-3 win and their first Ed Chynoweth Cup in franchise history. True was originally selected by the Thunderbirds in the first round, 48th overall, of the 2014 Canadian Hockey League Import Draft. True, from Copenhagen, captained Team Denmark at the 2017 World Junior Championship. After the 2017 Championship True signed a contract with the San Jose Barracuda of the AHL. A year later he signed a two-year entry level contract with the San Jose Sharks. True made his NHL debut February 4, 2020, against the Calgary Flames. He played 12 games with the Sharks last season and had four assists. 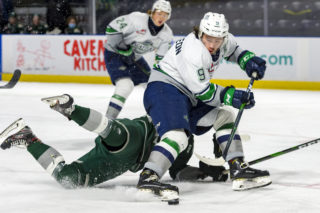 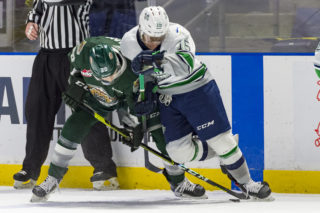 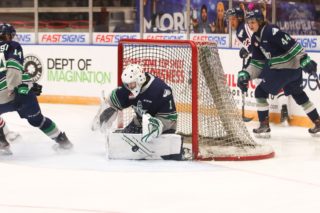 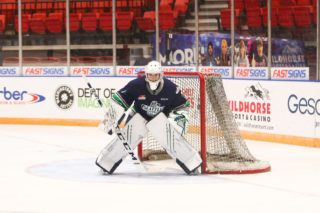 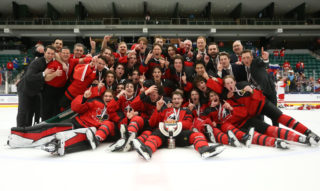